WAS THE NEVADA 2016 ELECTION STOLEN BY ILLEGAL ALIEN VOTERS?

WAS THE NEVADA 2016 ELECTION STOLEN BY ILLEGAL ALIEN VOTERS? 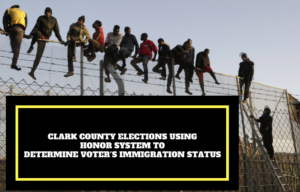 Serious security gaps in Nevada’s election system uncovered this week put the credibility of the entire system and November 2016 election in doubt. Did President Trump win Nevada after all? Did Question 1 really pass? There is now a serious crisis of confidence in the election system in Nevada that must be addressed now. On October 25, 2017, 360Daily.net served the Clark County Elections Department with the attached Freedom of Information Act request (FOIA).

360daily.net requested on October 25, 2017, the following information from the Clark County Elections Division:

Under the Nevada Open Records Act (NRS.239), we are requesting

360Daily.net received the attached letter below from the Clark County Elections Department in response this week. Note the paragraph in which they say “We do not have access to any database which can identify legal and illegal aliens in our voter registration system. Therefore, we do not have the ability to provide the records listed in your public information request.”

The Clark County Elections Department admits in their response that they are not checking the citizenship status of any voter registration forms submitted to their office from the DMV and or any other sources. They go on in their response letter to say they operate on an honor system. “It is the voter’s responsibility to verify that they are eligible to vote.”

However, DMV information officials have told 360Daily.net that they put an asterisk next to the names of the people they suspect are not citizens when they “transmit voter registration forms to the Clark County Elections Department.” So the Department is ignoring those asterisks and allowing legal and illegal aliens to register to vote without doing any further investigation of their citizenship qualifications to vote. In addition, the DMV computer system does not have any way of distinguishing who is and is not a citizen according to the DMV spokesperson. So DMV clerks who accept the paper voter registration forms are putting the asterisk next to the names of people they know are not citizens. But under a settlement earlier this year with the ACLU, the Nevada Secretary of State and the DMV, the DMV must submit those registration forms to the Clark County Elections Department even when they know the person is NOT a U.S. citizen.

Senator Michael Roberson and Sen. Scott Hammond were sponsors of Senate Bill 303 and instrumental in its passage. Conservatives warned that giving driver’s licenses to illegal aliens would open the floodgates allowing illegal aliens to register to vote through the DMV.

SCREENSHOT OF THE LEGISLATIVE RECORD FROM 2013 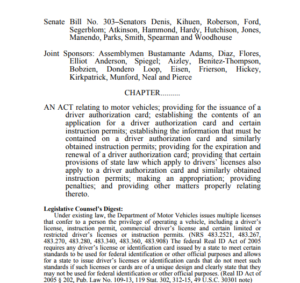 “As an elected official you have a duty to protect the election process from fraud. That is why it is so disappointing that at a time when conservatives across the state were opposing efforts to weaken those protections, Scott Hammond was sponsoring legislation to do just that. It was clear at the time that this kind of legislation could lead to voter fraud. Now it appears those fears have come true.”

The fact that the Clark County Elections Department has rejected zero voter registration forms submitted to them over the last 24 months from legal and illegal aliens even after the DMV flagged those registration forms is malfeasance at best and institutional criminal corruption at worst. 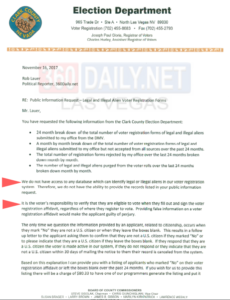 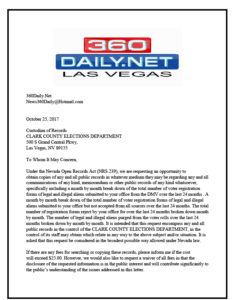