In the audio, a voice that sounds like Sheriff Lombardo says, “I don’t want this spook associated with the family.”

Lou Colagiovanni of the Las Vegas-based 2 Shovels PAC has been investigating Sheriff Lombardo amid reports of corruption. According to Colagiovanni and other sources familiar with Lombardo’s family, the racist comment was in reference to a black man named Drew Newson who allegedly was dating Lombardo’s daughter, Morgan Lombardo.

The audio clip first appeared in a music video published last week by the anti-Lombardo 2 Shovels PAC. Local FOX5 Las Vegas anchor Cyndi Lundeberg appeared interested in running a story on the audio and contacted Colagiovanni and his associate, Nephi Oliva, on June 2.

In e-mails leaked to DANGEROUS from that same day, it appears Lundeberg also contacted Lombardo’s daughter via Facebook, prompting Lombardo’s campaign manager, Jim Ferrence, to fire a warning shot at the reporter.

He wrote to her in an e-mail on June 2, “Can you please confirm or deny having sent the attached Facebook message to Sheriff Lombardo’s daughter, the content of which is so unprofessional that I have to assume it’s a fake?” 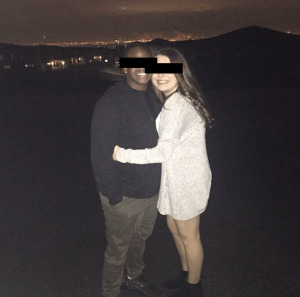 According to text messages provided to DANGEROUS, Lundeberg then told 2 Shovels PAC she would only cover Lombardo’s alleged comments if the music video, which features the racist language, “had millions of views and it needed to be addressed.”

In one of the text messages provided to DANGEROUS, Lundeberg said to Oliva, “[Sheriff Lombardo’s] campaign manager just called the station.”

“I was turned off by Cyndi’s willingness to cover-up Sheriff Lombardo’s overt racism and her total disregard for journalistic ethics,” Colagiovanni told DANGEROUS. “Then she gave me one of the most pathetic excuses ever, telling me, ‘I don’t even have a way to contact [Lombardo],’ which is obviously a lie.”

The term ‘spook,’ used with disparaging intent toward black people, dates back to the 1940s.

Sheriff Lombardo, who is up for re-election this year, has come under fire for his apparent lack of transparency and investigative mismanagement of the Las Vegas shooting that occurred on Oct. 1 of last year. He’s also been accused of attempting to cover up the encroachment of the MS-13 gang into Las Vegas.

When reached for comment on the audio, Tim Bedwell, a former North Las Vegas police officer and Lombardo’s rival for Clark County Sheriff, said,  “I don’t know the background on the audio, so I prefer to wait.”

2 Shovel PAC’s Oliva added, “Cyndi Lundeberg contacted me and appeared to be forthright to build our confidence so she could secure our Intel and then kill the story. Another classic example of the pervasive level of cowardice in our local media.”

2 Shovels PAC has not revealed how it obtained the audio clip, which is unconfirmed to be Sheriff Lombardo but bares a striking resemblance to his very distinctive voice. FOX5 Las Vegas declined to comment on the PAC’s allegations against Lundeberg.

The Las Vegas Metropolitan Police Department and Jim Ferrence, Lombardo’s campaign manager, did not respond to multiple requests for comment.

Primary elections for Clark County Sheriff will be held on June 12. Democratic candidate for governor of Nevada, Steve Sisolak, has endorsed Lombardo for Sheriff. On Tuesday, the Nevada Republican Men’s Club will host a luncheon with Lombardo as special guest.

Laura Loomer is a conservative investigative journalist and activist. Originally from Arizona, Laura began her career working as an undercover journalist for Project Veritas from 2015-2017. She covers politics, anti-Semitism, immigration, terrorism, the Islamification of the West, and voter fraud. Loomer’s investigations have been featured on nearly every mainstream media outlet in the United States, as well as many international publications.

Disclaimer: 360 has not independently verified the authenticity or accuracy of the audio claiming to be that of Sheriff Lombardo. Sheriff Lombardo and LVMPD have refused to confirm or deny way about the story and tape.